Difference between revisions of "Kinu"

"Noon is the most awful time of day," your daughter declares.

This ought to be good. You're all ears.

Kinu is the first of the named floof children that Kiyoko spawns for the Champion, being the firstborn daughter. She appears after Kiyoko's first child has been born, in a little scene where she plays go with both her parents, and afterwards can be found at the hillside crossroads each time the Champion enters the astral plane.

Champions can interact with her once per visit, after which she becomes unavailable until the next time they visit.

You crouch down so you're at eye level with Kinu, and give your fluffy daughter a look-over. She's clothed in much the same way as her mother is — the same foreign yet rather traditional light dress, a yukata, was it? Unlike Kiyoko, who goes for the more graceful, flowing look, Kinu's skirts are much shorter, ending at just below her knees. For a little fox who plays in dirt and climbs trees on a regular basis, this looks to be just about right.

Her clothes are in shades of white and blue to go with her silvery-white hair and fur, and a purple anklet's been looped about her ankle, complete with a small bell. You get the feeling that there's some significance to it — it certainly isn't a bell proper, as there's no clapper within to make it ring; perhaps you should ask Kiyoko about that sometime. Long sleeves and thick hems seem to be her thing, and like her mother, the lot is bound at her waist with a large purple sash, tied into a bow about her back. Looped about Kinu's neck is a collar with yet another bell on it, made from the same material as her anklet; she really likes these things, doesn't she?

When it comes to height, Kinu definitely takes after her mother in that regard. It's not correct to think of her as small — the little kitsune is more fun-sized in that regard, and is determined to prove it with a presence as big as her physical form is small. Besides, Kinu's only roughly seven or eight summers of age, she's got a lot growing left to do. In the meantime, maybe her petite stature will mean that she won't be raiding the peach grove with ease.

Like all of her kind, Kinu has large, fluffy fox ears that sit atop her head, little tufts of fur sprouting haphazardly from within them; this is accompanied by a set of three tails that emerge from just above the waist of her skirts. For someone as young as her to have three is quite promising, and it can't be denied that Kinu is her mother's star pupil, either. Otherwise, though, your daughter appears almost perfectly human, if with a somewhat vulpine cast to her nose, chin, and slitted blue eyes.

"I know I'm very pretty, Papa. Mama tells me that she comes from a line who takes good care of themselves and are exceedingly beautiful, even by kitsune standards. Is that why you chose to be with her?"

Well, you didn't exactly choose to be with her — you happening across Kiyoko was a bit of a surprise, if anything else. But it was a pleasant surprise, no doubt.

Kinu beams, the little kitsune's face lighting up. "One way or another, I'm very glad to have been born."

Oh, of course. You give Kinu's fur a little ruffle, and then stand back up. All in all, for all the smarts she might have, she's a cute, excitable little thing all right.

Since all of Kiyoko's named floof children are intended to reflect some aspect or other of the Champion, Kinu represents the Champion's ability to learn things at a frightful rate — she seems to instinctively grasp any idea or concept she comes across, mastering skills in the blink of an eye. Where Kiyoko has had a very, very long time in captivity on the astral plane to learn what she has, Kinu simply absorbs information at the same breakneck speed the Champion exhibits.

That being said, she's still an eight-year-old child, with the desires and maturity of such; while Kiyoko's generally calm temperament has some hold over her daughter, it's tenuous at times. Raw intelligence doesn't necessarily mean that one makes good decisions — in fact, it can very easily mean that Kinu simply rationalises away her bad choices and childish desires, making things far worse than if she were Garret-level dumb.

It's important to note that as Kiyoko's firstborn daughter, Kinu has the potential to be a den mother herself, and will mention as much in her dialogue; her existence is also one of the prerequisites for getting Kiyoko out of the orb.

Important note: This content is partially or completely unimplemented and may change prior to being put in-game.

How you raise your very own fox daughter has important implications as to how she eventually turns out as a young woman. The PC's actions, coupled with how the player has Kinu react to various situations and events, will mould her personality when she eventually leaves the astral plane.

Kinu has a personality score which starts at 1. Actions and decisions made by the player in having the PC interact with Kinu, or directing her actions in events where the player steps into her shoes, can change it positively or negatively, or leave it unaffected. Decisions may not always be immediately apparent in their effects. Upon leaving the orb as a young woman, her final personality score is checked; a negative score will mean Kinu takes on the Kitsune Hime personality; zero or above means she takes on the Young Inari personality.

In addition to determining her personality, players may also choose to influence Kinu's choice of favoured weapon; she will either take to the naginata or hankyu depending on the player's choices in the A Lady's Armaments scene. If the event for some reason has not triggered, she will default to the naginata.

The final effects of your care (or not) on Kinu are summed up thusly: 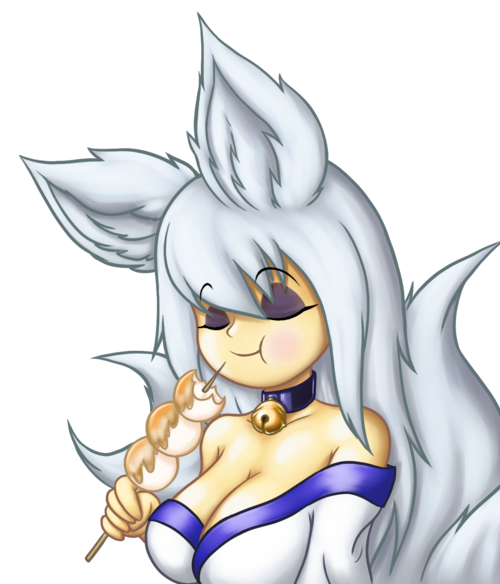 No, she doesn't care.

No, she REALLY doesn't care. 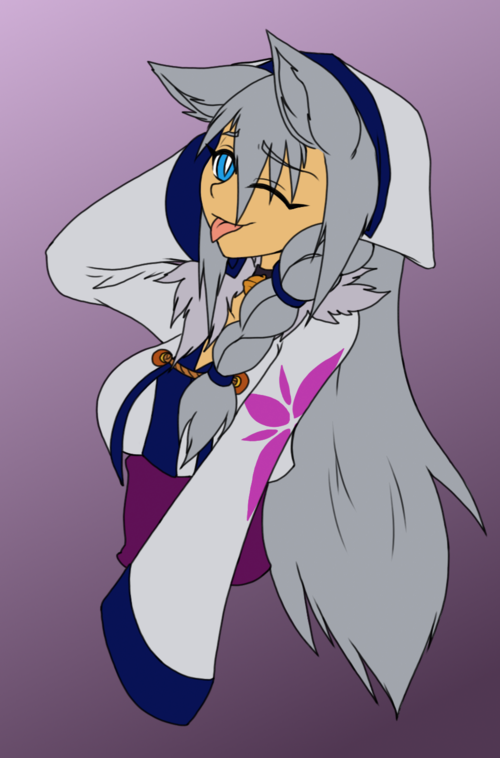 Up to no good, as always.

Her relationship with her mother isn't the best. 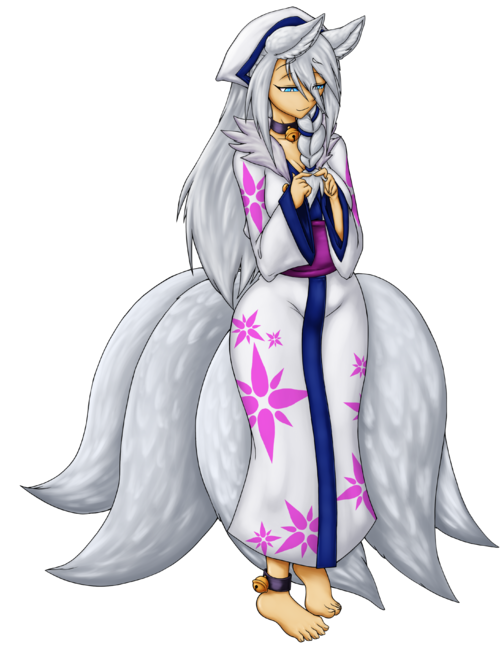 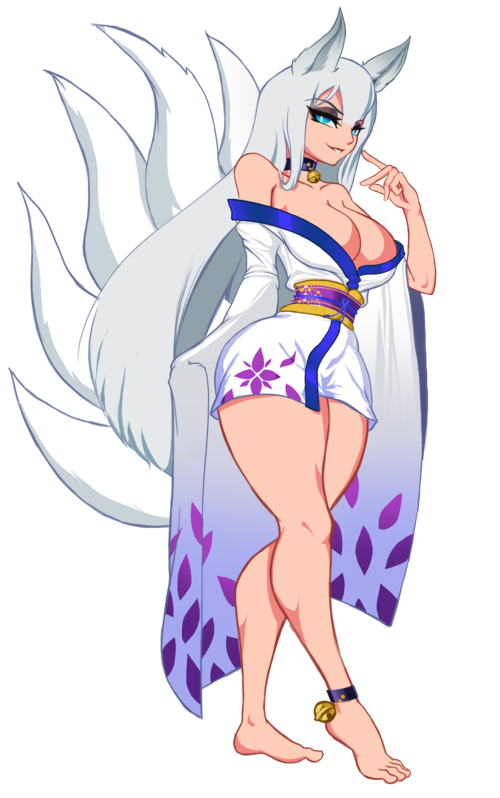 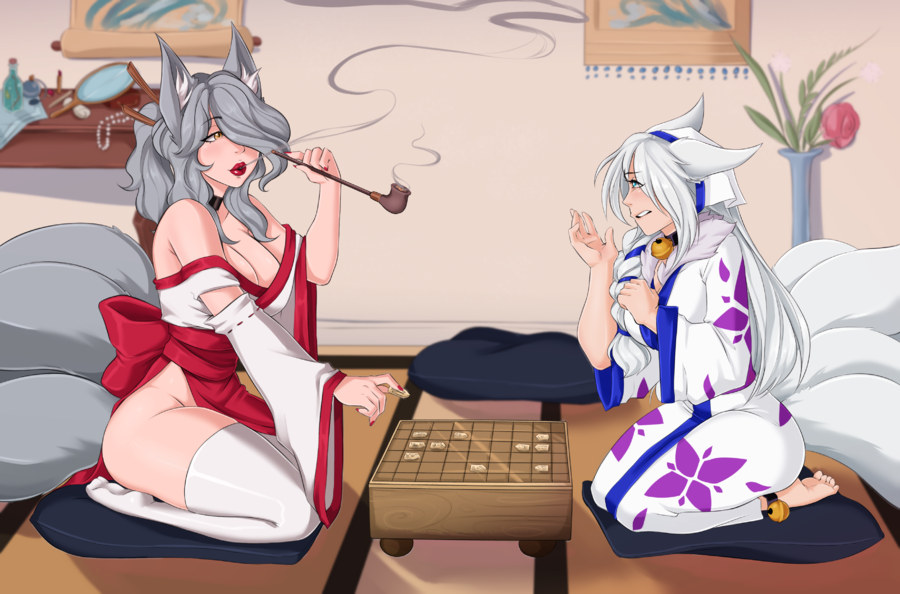 For the first time in her life, Kinu had lost at shogi to someone who was not her parents. This... was an unwelcome yet instructive sensation.
Retrieved from ‘https://wiki.smutosaur.us/CoC2/index.php?title=Kinu&oldid=7046’
Categories: