Unlike their mother, these women are clothed in colorful rags and scarves, barely concealing pert breasts and broodmother hips — though nowhere near the matron's size, and doing little to conceal their engorged sexes, glistening with feminine slime — and each carries a small, curved dagger in her winged arms.

Despite being garbed in black thieves’ rags and cowls, you can easily see the harpies possess the signature traits of their race: plump asses, egg-bearing hips, and meaty thighs that lead down into bird-like legs. Each of them wields a curved dagger in a backhanded grip, though they seem more interested in teasing and grandstanding than doing you any harm.

Subsequent the Champion can encounter the harpies in the Foothills will result into the same Harpy Ambush with the same Fight and Pay Them options.

The Harpy Ambush normally consists of:

If the Champion chooses to pay the harpy ambush and has a cock, they have the option to fuck the harpies.

If the Champion is the victor, they will be able to:

If the Champion is defeated by the Harpy Ambush:

The Harpy Thieves have two different headshots of which are randomly chosen. 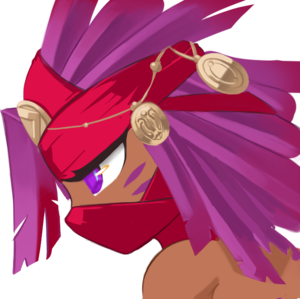 The second thief bust by DCLzexon
Retrieved from ‘https://wiki.smutosaur.us/CoC2/index.php?title=Harpy_Thief&oldid=7483’
Categories: