"It's th' Zen thing, I'm tellin' ya," Miko complains to you when you bring up the matter of her cousin to her. "Weren't no good in emptying his head none. He goes to th' Old Country for a small trip when he comes of age an' returns home five years later with a head full of ideas, big an' grandiose ones. Our smilin' cus done turned into a bushi without a war to fight, an' it's eatin' him up inside."

Nakano Kurokawa is a samurai kitsune who resides in the Kurokawa kitsune den. The great-great-grandson of the den matron and imperial governor Komari, he is nominally responsible for the security and military affairs of the entire frontier, several smaller dens included. If Kinu takes on the kitsune hime personality, she will be attracted to his intense desire and drive and refuse to give up on him, and the two eventually become an item.

When he does appear, though, you're almost disappointed. A single black-furred, five-tailed kitsune rounds the corner, outfitted in full-body armour consisting of what looks like numerous interlocking red-painted plates over a gambeson. He's tall for a kitsune, which means he's merely slightly short by Marches standards, and kind of lanky to boot. The armour's made in a style clearly native to his homeland — the helmet even has little ears on it like those of catfolk make do, instead of folding one's ears under the interior in lupine fashion.

But what strikes you about this fellow is how young he looks — not because of his build or anything, but the poor bastard's a pretty boy, with a baby face under an unkempt shock of hair that's in sharp contrast with the military neatness with which he carries himself.

The black-furred kitsune's carrying a curved longsw — no, it's a greatsword in his left hand by the lacquered scabbard, and freezes for a fraction of a second as he spots you, his entire body tensing as his eyes narrow and ears fold back.

Nakano "The Iron Poet" Kurokawa is one of Komari's many, many great-great-grandchildren, a black-furred, five-tailed prettyboy floof, having earned the moniker not just because of how elegantly he moves in combat, but also because he writes lots and lots of waka poetry. All of it is absolutely atrocious and he's aware of that fact, but he soldiers on because a good bushi is supposed to excel at craft in order to deepen his soul. After all, he desperately seeks to be a man of culture, and men of culture need to be able to write good, moving poetry. Miko, Mai and Komari have had it up to there with his nonsense -- if only he would actually concentrate more on his scroll painting, which he is actually decent at, and not insist on accompanying each one with yet more doggerel!

Some immigrants past the first generation grow away from their home cultures, others cling to it with a ferocity that surpasses their parents'. Nakano is of the latter, being quite the glory hound. He dreams of being able to return to the Old Country someday — just a step away through Komari's torii gate — but not before accruing enough glory and renown in service of Keros and the Cherry Blossom Throne that he'll be respected even as a diasporan.

He was not always like this, of course. After his coming-of-age ceremony at fifteen, he returned for a five-year stint to achieve one of his childhood dreams and be formally trained in the way of the warrior near the capital -- something Komari was able to pull off for him given her position as colonial governor. However, this turned out to be a decision she would eventually come to regret, for her great-great-grandson returned with a rank that he was far too young and inexperienced to hold, an appointment that carried no weight to its name, and an intense, burning desire to prove himself with the full-hearted belief of everything he had been taught.

Of course, the appointment is a complete sham, no doubt the result of politicking which poor Nakano had no idea he was being caught up in as a pawn. The very lords and ladies whom he is supposed to give his complete obedience to have set him up to fail in his appointment, and make a complete fool of himself considering the situation; the entirety of the colonial regiment, for all its titles, numbers seven, him included. Without resources, funding, hands or any form of logistics, Nakano was expected to keep the peace on the frontier, even in the smaller dens. Not that he's about to let his great-great-grandmother mobilise her resources to help him, stubborn fox that he is. There's a part of him that resents this obvious slap to the face in his appointment to the role, but to show contentiousness towards his superiors -- especially in the homeland -- goes against so much of what he truly believes in, so that gets externalised towards foreigners instead. He can't fit in with the natives of the Marches, nor is he really accepted by those he considers to be his own people, a mirror inversion of Kohaku's dilemma. The double stain of shame -- both for being descended from Komari, and being a colonial -- is hard to shake off.

The only escape is art.

To say that Nakano is a terribly torn young man is an understatement. To his own shame, he drinks far too much, a habit that is not particularly helped by Takahiro being more than willing to ply him with liquor for old times' sake. That, and horrible poetry -- mountains upon mountains of terrible doggerel, with little to no improvement despite trying so hard; his scroll painting is actually much better and would be quite worthy if he didn't insist on adding a few lines to every piece. But he does it anyway because that's something expected of someone of his rank and station -- to excel in culture, art and craft to deepen his soul. The mere thought of just dropping it and concentrating on what he's good at simply doesn't occur to him, it's a mental block. He's desperate to prove himself, he needs to prove himself to show that his appointment isn't a sham, to prove to his family across the ocean that he's no less of a fox for being born on foreign soil, to banish all those ugly self-doubts that keep one awake in the night.

And what better foes to vanquish than an invasion of demons from another world?

If Kinu is raised to be a kitsune hime, she will take this gallant, romantic and exciting big ham as a consort. Komari is not pleased — Nakano's passionate and impetous behaviour, his romantic and Don Quixote-ish outlook on the world, while attracting Kinu, is a source of much frustration for the Shrine Mother, who only wants her descendant to stop all this nonsense and make something useful of his life and salvage a bad situation instead of riding the tiger to its bitter end.

The PC will encounter Nakano in the hallways leading to the center of the den, having just been lectured by his great-great-grandmother yet again and heading back to his quarters to compose himself by churning out more terrible poetry. Upon seeing barbaric natives trapaising down the corridors of his home, he surmises that Azami has failed in her duty, and that he'll be able to gain the glory of defending his home and show up that emotionless, acerbic bitch by dealing with the champion himself.

Should the champion and their companions survive the encounter one way or the other, upon the den turning friendly to them he may be encountered later in his quarters from 1200 to 1700 hours every day; his introduction will differ if the champion managed to defeat him, was defeated by him, or if he was never encountered during the dungeon.

Nakano is planned to be a questgiver and will play a role in several of Kinu's events as an adult, especially if she has taken on the kitsune hime personality.

Losing to Nakano without having the Amulet of Union on the champion's person will result in him beheading the champion on the spot. 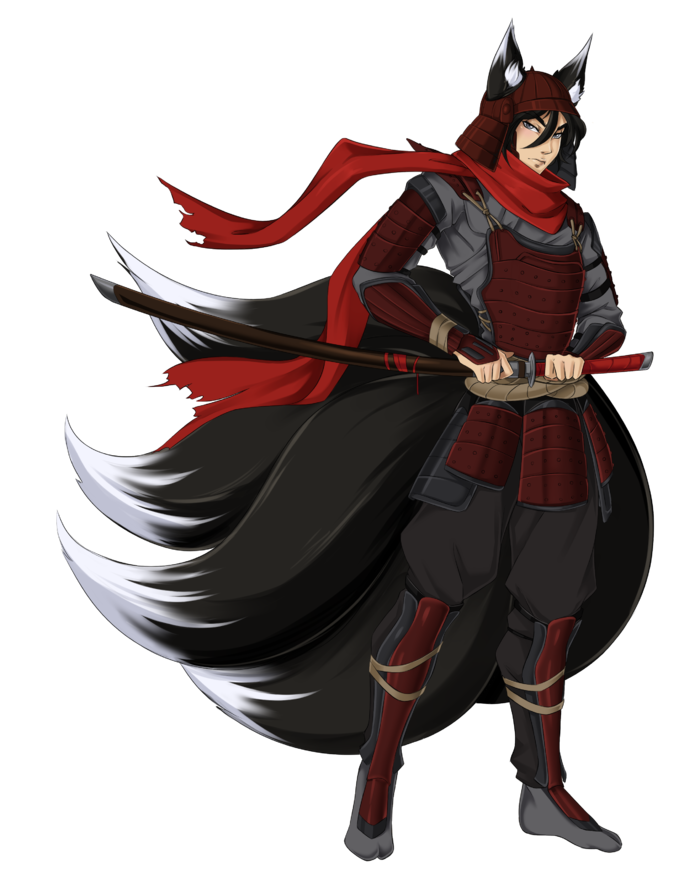