The Wyvern Girl is a recurring type of monster girl that the champion can encounter in the Foothills region east of Hawkethorne. Like most randomly encountered creatures, they will try to fight and rape the champion.

Despite displaying a near-human level of intelligence, Wyvern Girls have not show the ability to use language.

A creature covered in moss-green scales with a pair of great wings sprouting from its armored arms. Four wickedly sharp horns curl back from its brow, and its mouth is full of sharp fangs that glint with a colorful pink liquid — venom! A thick, smooth-scaled tail swishes behind the creature, curling around its bare legs. Indeed, the draconic creature is entirely naked, revealing a puffy dark blue slit between its legs matched to a pair of large rises amid the lighter tan scales on her chest, forming a pair of large, heavy breasts capped with dark blue teats.

Encountering the Wyvern Girl for the first time will unlock the Wyvern Codex Entry.

If the Wyvern Girl is about to give birth, the Champion may encounter her having just laid their egg.

If the Champion were to be defeated by the Wyvern Girl: 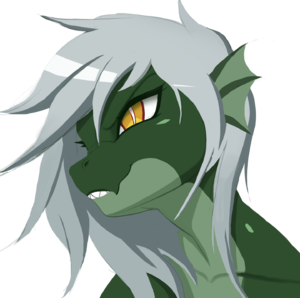